The Gas Chromatograph (GC) makes possible to separate the volatile components of a very small sample and to determine the amount of each component present. A GC consists of a flowing mobile phase, an injection port, a separation column containing stationary phase, a detector, and a data recording system. Typically samples of 1 µL or less are injected on the column. These volumes can be further reduced by using what is called a split injection system in which a controlled fraction of the injected sample is carried away by a gas stream entering the column.

Mobile phases are generally inert gases such as helium, argon or nitrogen. Injection port is maintained at a higher temperature than the boiling point of the least volatile component in the sample mixture. Separation of the components with a wide range of boiling points is accomplished by starting at a low oven temperature and increasing the temperature over time to elute the high-boiling point components. The rule of thumb is that retention times correlate with boiling points (do not expect an exact quantitative correlation). The rate at which compound move through the columns depends also on the nature of the interaction between the compound and the stationary phase. Other variables that affect this rate are column temperature and carrier gas flow rate. Based on results of your first run, you will then vary the column temperature in order to achieve good separation of the peaks in the shortest possible time.

Flame ionization detector (FID) is the most widely used detector for organic samples. FID, use an air / hydrogen flame to pyrolyze the effluent sample. The pyrolysis of the compounds in the flame creates ions. A voltage is applied across the flame and the resulting flow of ions is detected as a current. The detector shows a different response to each compound. 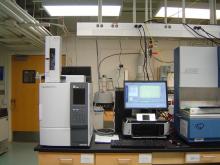