The system is a Mettler STARe ThermoGravimetric Analyzer, TGA/sDTA851e, coupled to a Balzers ThermoStar Mass Spectrometer. The TGA can go up to 1100°C in almost any atmosphere. Its balance resolves to 1 microgram. Typically the sample size is around 10 milligrams. The MS can measure the gas evolved from the thermal decomposition of the sample up to 300 AMU.

The Mass Spectrometer is a Balzers Quadrupole. It typically measures integer mass units and can detect between 1 and 300 AMU. It has a very low detection limit, typically picking up materials in the PPB range. It can easily resolve the different isotopes of an element.

This TGA-MS system is flexible, robust, and very easy to use. The temperature ramp is fully and easily programmable. There is a sample robot that allows up to 34 samples to be run automatically. We offer quarterly training for the TGA.

Because of the one microgram resolution of the TGA balance, very small samples can be tested. The typical sample size is 5 to 15 milligrams, but changes in the mass of a 1 milligram sample would be evident to 0.1%.

The sample chamber in the furnace is sealed to allow full control of the atmosphere to which the sample is exposed. The active part of this chamber is made of fused silica, so that samples can be exposed to many reactive gasses. UHP nitrogen, dry air, and UHP argon are available for routine analysis. Arrangements can be made for the use of other gasses.

Samples are always loaded onto the TGA balance by a Sample Robot. This allows multiple samples to be run without the user needing to be present. Since tests frequently take from one to three hours, this can save the user a lot of time and trouble

Setting up the TGA temperature program is completely intuitive. Sample preparation consists of weighing a crucible, loading the sample into the crucible, weighing the full crucible, and setting it on a tray. Configuring a test takes only minutes. Getting a test into the queue for the autosampler is trivial.

The software includes powerful tools for analysis but the data may be exported in ASCII format.

Typically, the MS is used to look at integer atomic mass units within the range of 1 to 150, but it can measure up to 300 AMU.

The software for the MS is easy to use.

Each user is responsible for having their own compatible crucibles. Alumina and platinum crucibles are available at cost from the MRL. These crucibles can be cleaned and reused many times.

Anasys Thermal Methods Consultants has a fine introduction to thermal analysis at http://www.anasys.co.uk/library/tga1.htm. 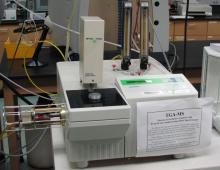