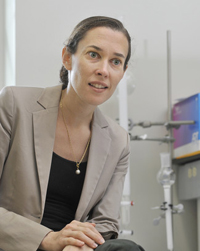 Biomaterials and Stem Cells for Tissue Engineering: Tissue and organ loss due to trauma, disease, and congenital abnormalities remains a significant clinical problem. Tissue engineering is a multidisciplinary field that aims to regenerate tissues and organs using the general approach of seeding cells on a scaffold. The scaffold serves many purposes including a three dimensional environment, soluble and insoluble cues to control cell function, maintenance of shape, and mechanical protection. We are examining hydrogels as a scaffold for tissue engineering. Advantages of hydrogels are the ability to encapsulate cells, high water content for nutrient and waste transport, and the ability to implant in a minimally invasive manner. Previous research focused on the development of photopolymerizing poly(ethylene oxide) for minimally invasive scaffold implantation and cartilage tissue engineering. The lab is currently focused on developing synthetic-biological hydrogels with highly controlled physical properties and biological function. The discovery of human embryonic stem cells has created the possibility to regenerate any tissue from a single, totipotent cell population. We are examining the potential of using biomaterials for stem cell differentiation and engineering mesenchymal tissues. Finally, our goal is to translate this knowledge to clinically-practically technologies to improve patient care.

Dr. Elisseeff received a bachelors degree in Chemistry from Carnegie Mellon University and a PhD in Medical Engineering from the Harvard-MIT Division of Health Sciences and Technology. After doctoral studies, Dr. Elisseeff was a Fellow at the National Institute of General Medical Sciences Pharmacology Research Associate Program. In 2001, Dr. Elisseeff became an assistant professor in the Department of Biomedical Engineering at Johns Hopkins University. Her interdisciplinary laboratory comprises surgical fellows, biologists, chemists, and engineers that work together to develop new biomaterials, study stem cells, and design new technologies for regenerative medicine. Clinical collaborations at Johns Hopkins extend to plastic surgery, otolaryngology, orthopedics, and ophthalmology. In 2004, Elisseeff cofounded Cartilix, Inc., a startup that is translating adhesive and biomaterial technologies for treating orthopedic disease. Dr. Elisseeff is now an Associate Professor of Biomedical Engineering and Orthopedic Surgery at Johns Hopkins and directs the Cell and Tissue Engineering Program in Biomedical Engineering. She serves on the Scientific Advisory Board of Bausch and Lomb, Kythera Biopharmaceutical, and Cellular Bioengineering Inc. Dr. Elisseeff has received awards including the Carnegie Mellon Young Alumni Award, Arthritis Investigator Award from the Arthritis Foundation, Yasuda Award from the Society of Physical Regulation in Medicine and Biology, and was named by Technology Review magazine as a top innovator under 35 in 2002 and top 10 technologies to change the future. In 2008, Dr. Elisseeff was elected a fellow in the American Institute for Medical and Biological Engineering and a Young Global Leader in the World Economic Forum. She has published over 110 articles, book chapters and patent applications and given over 130 national and international invited lectures. Drs. Elisseeff and Schein were recently awarded a grant from the military to develop technologies for ocular battlefield wounds.